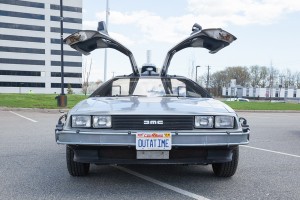 Bat-mobile (Tumbler) – The Dark Knight
Part car, part tank, part computer, the Bat-mobile was seriously upgraded in The Dark Knight series.  Backed with weapons, gadgets, and a handy get away bike —should it ever start counting down to self-destruct— the Bat-mobile is the ultimate combination of sexy styling and practicability in a car.

DeLorean - Back to the Future
The DeLorean became iconic not because of the car itself, but rather because it happened to be at the right place in the right movie.  Despite being a poor quality car by all consumer standards, the collectible car still fetches high prices today due to its status as a pop culture symbol.

1970 Dodge Charger – The Fast and the Furious
The first movie was the car that started it all, the 1970 Dodge Charger.  The ambassador for American muscle, the Charger was such as great car for the movie because it fit Vin Diesel's character's personality and style perfect and made a great contrast to the smaller, faster cars of the other racers.

2005 Audi A8 – Transporter
Multiple license plates, more gadgets then Inspector Gadget, weapons, secret compartments, ejection seat; what is not to love.  The Audi A8 put the company on the map and its influence can still be seen in the similarly sleek, slightly round cars that the company still produces to this day.

1972 Ford Grand Torino – Grand Torino
Not many cars get their own movie named after them and this is one of the coolest.  Tough yet stylish, powerful with a big roar, this car is the obsession and prized possession of an old ornery war veteran played by legendary actor Clint Eastwood.  In a symbol of ignorance and stubbornness overcome, the car becomes a young Korean kid's new ride.

1968 Mini Cooper – The Italian Job
This car was perfect for the movie because the heist was based on a heavily modifier version of this car and it was the only one that could do the job with the speed and hauling required.  The remake some 40 years later used a newer model of the car, showing that the original was the perfect fit and a important memory to keep of the original.

1967 Shelby Mustang GT500 – Gone in 60 Seconds
In a movie where there must have been 400 plus cars discussed, looked at, stolen, thought about, only one stands above them all.  The object of a passionate love affair and mental struggle, the Shelby graced the movie screen with an elusive yet deadly presence that made it the perfect centerpiece for this car extravaganza.

1963 Aston Martin - Goldfinger
This car is the reason every action movie now must contain multiple amazing rides or suffer at the hands of the movie watching public.  The Aston Martin was the most effective product placement before there ever was and the epitome of luxury.

Ferrari 250 GT California - Ferris Bueller's Day Off
Every good hooky story needs a cool car to accompany it or your effort to elude teachers and parents is wasted.  The Ferrari has gone on to become a premier luxury car.  It served its place well to be the fleeting symbol of freedom that would ultimately come crashing down for Ferris.